Take me to the river

This river takes no time at all to fall for.

That first time I saw the Smith, it was my second or third day in Crescent City. Meg and I were looking for a place to rent and we ended up in Gasquet, a little hamlet on the north fork of the Smith. Pull up to the house, park, walk in the front door, nothing much happening. Outside — a drive of gravel and dirt looped around a Magnolia tree. Single-story ranch style design. Wall-to-wall carpeting and nasty curtains inside.  Then walk out the back and on to the deck and BOOM, there it was. The Smith. Not 100 feet from where we stood. A boulder-strewn, noisy, misty, always-on alleyway of water.

The north fork is a short stretch of water that runs fast. And clean. I used to stand in that cold, cold kitchen and stare out through a single-pane glass window over the sink and get the feeling like I was standing right over it. Right over the water.

Our place in Gasquet was probably the sixth or seventh house on the river at that point. Nothing but bear, salmon and the occasional crazy kayaker upriver. No more than another few homes past ours. I could have poured a cup of coffee and died right there. No regrets, ever.

But we left that house after the cold started to make us crazy. A wood-burning stove and a crappy, undersized propane-fed wall heater couldn’t warm our city bones.

We moved downriver to the main stem of the Smith. Down past the forks in Gasquet, downriver and past the middle fork gorge, past even the forks in Hiouchi. Here we’ve got almost every drop of Smith River water spilling past our place, the bnb.

It’s three years now and I think I know this river, but I don’t. I’ll die someday with that coffee cup in hand and I’ll know no more about this river then than I did that first day on the north fork. It’s that big.

One of the more mysterious places on the Smith is the mouth of the river where the fresh water of the land pours into the Pacific. I was there only once before. Compared to the rest of the river, well, it’s a subtle place. Current, yes, but no rocks, no riffles, and no sound.

The mouth of the Smith is a wide stretch of water, traveling almost due north at this point, that wraps around a constantly shifting sand bar populated by gulls and pelicans and then moves west into the Pacific. There’s some chop in the water where the fresh and salt meet, and seals bouncing with the water too, trolling for fish.

I was tooling down the highway from Oregon and decided to take the slow road that follows the bluff through the Smith River Rancheria. Follow the road till it dead ends into Mouth of Smith River Road (quite the name). Turn right and be sure to stop when the pavement turns to rock.

The Smith is the largest free-flowing river in the state. No dams along its run of nearly 100 miles, from three sources, two in California and one in Oregon. All that surface water ends up here, at a final bend in the river some 10 miles north of Crescent City, on Tolowa Indian land. But at the end of the road, on the Rancheria, the aura of grandeur is weak.

Like most days, there were the gulls and seals, and a few strange looking folks in cars, but not much more. I’ve seen pictures of boats at the mouth. And when the fresh water runs fast and the salmon and steelhead are coming in from the Pacific, bank fishing can result in a nice, bright fish. But not today. Just me and the other dodgy characters in their cars. 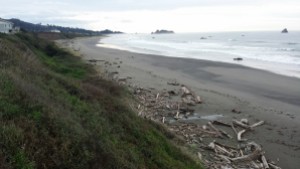 (top photo is of the Pacific Ocean off Tolowa land, not far from the mouth of the Smith; below is the funky landmark of the Ship Ashore motel and marina, a now-shuttered museum)

smith river
About the author