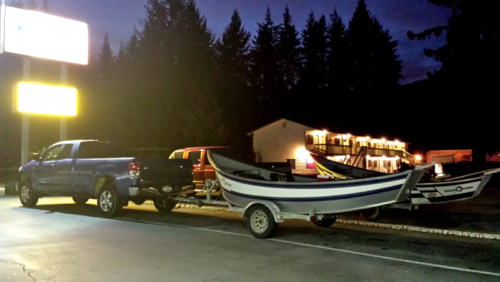 There is an element of the boy who cried wolf that surrounds the online fishing reports and radio programs that tout north coast fishing. After reading so many optimistic entries when the honest truth is that we are still waiting for the season’s big numbers to kick in, one starts to doubt the veracity of any conversation about the steelhead run on the Smith.

We’ve had a number of days when the conditions looked optimal for steelhead yet the fish weren’t ending up on the end of a line. A week ago when the plunkers (bank fishermen) should have been yarding in early-run fish hugging the banks during high water, well, they were being shut out and ignored.

We pray for rain, and pray again for fish. But fish can be stubborn.

So. We look for hints. 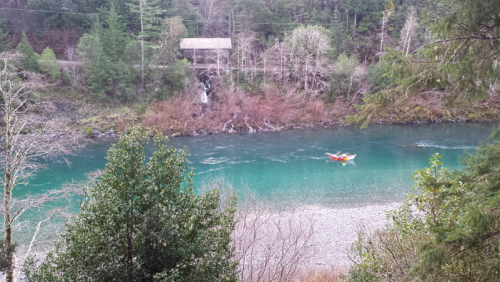 Here’s what I know: Today on my early run to town I could tell that even if the fish weren’t biting, the gentlemen fishermen were. The Hiouchi Hamlet, our gas station, town hall, and cafe all wrapped into one brick and mortar package was all a jumble with pickup trucks and drift boats on trailers. Fishing guides with steaming coffees in their hands and candy bars jammed in their pockets were busy meeting up with clients and talking among themselves. I stopped for gas and said a quick hello to local guides Willie Plunkett, Kim Hagen and Sam Stover. They had better things to do than chat with Curt so I nodded and kept pumping my gas.

Then for most of the day I watched from the deck, following the boats as they skimmed by on a glass-topped Smith. 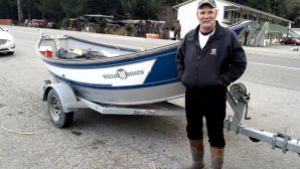 On a propane run around 4pm, back at the Hamlet, I ran into Kim Hagen (that’s Kim, above) at the dry end of his day. His clients tallied five steelhead hooked, four landed, and a smattering of entertaining but not-always-kept half-pounders (immature steelhead weighing around three to five pounds that are in the river to feed, not spawn).

Are the fish really, truly, absolutely making their run up the Smith? I’m going to make a few more calls but can say with confidence it’s looking darn, darn good.

smith riversteelhead
About the author