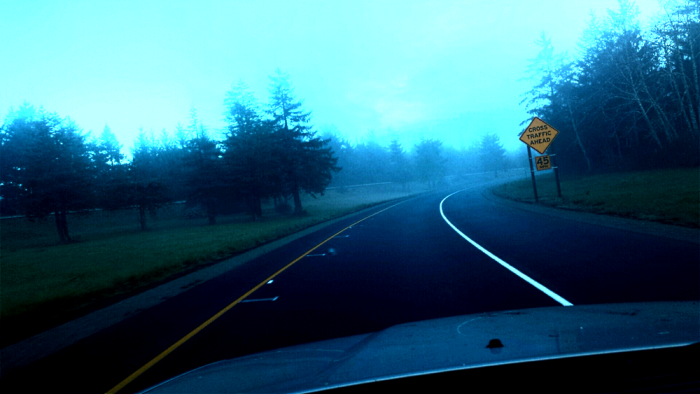 We borrow the title of a book or song (or lyric or line from a film) in our own musings because sometimes no one can say it better — catch a mood, distill a feeling, wrap up an emotional condition — than the original poet or poets. Be it John and Paul, Dylan, Clapton or Scorsese, I admit to taking liberties sometimes with these all-too-perfect phrasings.

So with the car radio blaring, and the latest big question from Meg floating around in my brain, I was sent into a kind of cerebral overdrive. Meg’s question was are you I happier running the bnb than you were running a web site? The soundtrack to the answer was Van Morrison’s Into the Mystic; the visual background a wall of fog as I left the flats of Crescent City for the trees on US Hwy 199 toward Hiouchi.

I get lucky when on the early morning drive from town, after dropping Meg at the hospital before the sun has risen, the DJ drops something epic on the platter. Today it was this Van Morrison tune. (I must be on a roll because yesterday, out of nowhere, came Joni Mitchell’s California, but I’m going to save that for another Big Question from Meg and another post.)

So here’s the long answer.

It can sometimes feel like an unending race, making sure everything is in its place at the bnb. But when I finally catch the beat and all the flywheel elements that contribute to this adventure on the Smith are flowing in unison, I actually feel more myself than at any other time. If you’re someone who bounces off the high and low walls of life, this would be a classic high and I’m fine with it.

There are even a few knock-out punches that elevate the experience to hyper-real and mega-good. Molly by the fire, silly-spot attended to and cooing to the attention of a dog-friendly teen or canine-obsessed adult; a graciously poured glass of superior pinot appears out of nowehere, destined for the hands and lips of then unsuspecting innkeeper; or maybe the coffee is tasting especially robust and extra fino this morning. It could be that the Chicken Basquaise just nipped it all so perfectly that a smile becomes uncontrollable and the appetite leaps off the banks and trees. Or the Smith looks up with such clarity and purpose that the real world, already hundreds of miles to the south (substitute north or east), retreats another light year or two away. Or the stars at night are just glaring in their unexpected brilliance.

I’ve seen it happen to others, getting lost in this place and then connecting with the real you. Well, it happens to me too. And when it does I am so sure of the answer to Meg’s question I can almost cry.

I have a few days off ahead of me. For painting, for planting, for my own pot of extra fino sweet-smelling coffee, taken undisturbed on the deck. So I’ll remember the highs, and the people who got me there.

See you when the paint dries.

Far fewer than six degrees of separation exist between Jane, Tim and I though we didn’t know that until meeting under the tall trees of Hiouchi. That connection, plus a love of trees, formed a quick bond. But Jane and Tim didn’t come to chit-chat (though we did plenty). They’d been bitten by the Titans bug and so off they went to seek out the grove. And not a clue was required.

Mike, Tiffany and kids Anthony and Anna. They say you don’t pick your family but if it were an option, I just might have to cast my vote here. From the kids’ sweet connection with Molly to the adults circling around the wine, I got the feeling they could have stayed longer. But did they know I’d have adopted them as my own?! Oh well…in another lifetime maybe we’ll meet again over foraged mushrooms and most excellent pinot noir!

Jenna and Jerry popped in from just over the state line, on a quick vacation from the real world. Dinner at chez Curt the first night, then it was all about the books and hanging out by the river. Love to see the smiles at the end of the stay.

Jennifer and Tom. If Cheryl Strayed hadn’t written her little book about hiking, these two would have had to. Outdoorsy and upbeat, they had real jobs to deal with, but that only makes the hiking and adventuring that much sweeter, yes? Jennifer was on a do-over to the redwoods (a few months early she’d encountered massive rains); this was a first for Tom. Perfect weather meant they met their match, finally.

Yup, that’s me nudging into the frame with Nancy, a returning guest. Nancy is on a somewhat regular commute to lands south. A mellow soul, she fits in perfectly with the bnb hiouchi vibe – mellow, deliberate, aware, kind. We enjoyed seeing Nancy again and can’t wait for her next trip through the redwoods.

Jon and Briana hung out for a few days at the bnb. She is of the campgrounds and wooded trails, he is of the city and lanes of concrete; she comes from more impulsive stock while he puts more planning into the moves. Did I notice any conversions taking place? Uh, not really. But a middle ground was well served, and, it might be said by looking at the photo here, happiness reigned over the people.

Kim and Dawn know how to travel. Having come west for a conference (on wine making, no less…ok, ok, they would say the business of wine making but I’m not so sure), the two colleagues wisely decided to arrive a few days early to explore the redwoods. On arrival, we chat, we sip cocktails, we jointly plot their days on the trail. And off they were, mostly out and about, the wine twins (my phrasing) were early to bed, early to rise. I would have needed a coffee convention after all the hiking these guests did. But they insisted it was wine that fascinated them…

Maryanne and Alan were colleagues once too, and I suppose they still are, duly settled in the business of a fine marriage. They continue the tradition of the civilized Canadians escaping their colder and wetter winters by visiting our lands to the south. And they came prepared, with chardonnay, with many experiences they graciously shared, and with a gift for effortless conversation. Over dinner I hardly said a word, entranced by talk of coincidentally shared travel experiences of other guests that night. This was the stuff of true B&Bs and I was in awe. Maybe I found the perfect couple to bequeath my bnb to? Well, at least some good folks who enjoy wine, a warm fire and some vino. Yes!